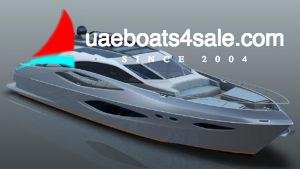 Turkish yard Numarine has announced the newest addition to its range, the Numarine 78HTS Sportfly. An evolution of the popular Numarine 78HT, this 24 metre yacht boasts a redesigned superyacht sundeck, complete with a central helm station and four reclining sunpads.

The aggressive exterior styling features cutaway bulwarks to allow more light into the main deck saloon, which is geared around socialising.

Accommodation is for eight guests split between four lower deck en-suite cabins, including a full-beam owner’s cabin with its own walk-in shower. Key features include a split foredeck seating area, which is ideal for relaxing in the sun and enjoying the view when cruising at speed.

Cutting edge technology on board the Numarine 78HTS Sportfly includes a smart energy management system that allows the yacht to operate silently at anchor all day with only a brief use of the generators to recharge at midday.

Noise insulation has also been thoroughly thought through and the result is a reading of just 66DB in the lower deck area when cruising. Power comes from a pair of 1,550hp MAN V8 engines for a top speed of 38 knots and a maximum cruising range of up to 400 nautical miles at 28 knots.